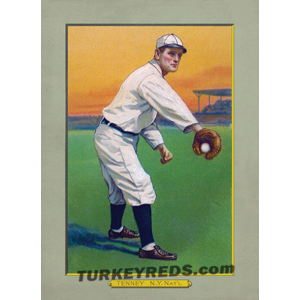 Born in Georgetown, Massachusetts, Tenney was one of the first players to enter the league after graduating college, where he served as a left-handed catcher for Brown University. Signing with the Beaneaters, Tenney spent the next 14 seasons with the team, including a three-year managerial stint from 1905–1907. In December 1907 Tenney was traded to the Giants as a part of an eight-man deal; after two years playing for New York, he re-signed with the Boston club, where he played for and managed the team in 1911.

When it came to fielding prowess, the consensus was that Fred Tenney ranked behind only Hal Chase among first basemen of the Deadball Era. Considered the originator of the 3-6-3 double play, Tenney also developed the style of playing deep and well off the bag, as modern first basemen do. “Tenney’s way is far different from that of other first baseman,” wrote a Chicago News reporter in 1897. “He reaches his hands far out for the ball, and stretches his legs, so that he is farther out from the bag on every throw than any other first baseman in the league.” With his unconventional methods that soon became the norm, the 5’9″, 155 lb. first sacker led the National League in putouts in 1905 and 1907-08 and assists each year from 1901 to 1907, setting a major-league record with 152 in 1905 that lasted until Mickey Vernon topped it in 1949. As for his offense, Tenney was a masterful bunter and exceptional place hitter who batted over .300 seven times in his 17-year career, retiring in 1911 with a .294 lifetime average.

Grandson of a former Massachusetts state treasurer and son of a Civil War veteran, Frederick Tenney was born in Georgetown, Massachusetts, on November 26, 1871. Fred’s nickname, the “Soiled Collegian,” came from his aggressive playing style and his degree from Brown University, where he was a left-handed catcher. Late in the evening of June 15, 1894, the night of his senior dinner, he received a telephone message from Boston Beaneaters manager Frank Selee, who was in urgent need of a fill-in for his injured catchers. After going to bed at 4 a.m., Fred arose early, looked for his absent roommate until he found him sleeping under a tree on campus, took a shower at the gym, had breakfast, and caught the train from Providence to Boston. That afternoon he made his NL debut, catching the entire game even though a foul tip fractured the forefinger on his throwing hand in the fifth inning. The Beaneaters offered him a contract despite the injury. The 22-year-old rookie rejoined the team a month later when his finger mended, demonstrating his offensive potential by batting .395 in 27 games.