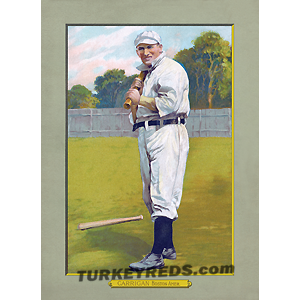 William Francis Carrigan, nicknamed “Rough”, started his career as a platoon catcher and played all ten seasons with the Boston Red Sox. Midway through the 1913 baseball season, he replaced Jake Stahl as manager of the defending World Series champion Red Sox as a player-manager. He then led Boston to a second-place finish in 1914 and two world championships in 1915 and 1916, compiling an 8–2 record as a manager in World Series play. Until Terry Francona duplicated the feat in 2007, he was the only manager to have won two World Series titles with Boston. Babe Ruth called Carrigan the best manager he ever played for.

Bill Carrigan was 28 years old and in his sixth season with the Boston Red Sox when Fenway Park opened her doors in 1912. Born and bred in Lewiston Maine, he was a first generation Irish Catholic immigrant whose parents immigrated before the Civil War. He attended college at Holy Cross where he played football and baseball. And it was there where he learned the trade of catching.

Known as an outstanding defensive catcher, with a pretty good stick, it was his toughness and refusal to back down that was his trademark. An excellent receiver and handler of pitchers, he was steadfast and relentless when guarding the plate and it was in that capacity where his reputation for toughness grew. He was involved with several confrontations which were simply “witnessed” by teammates, similar to a hockey fight, as he never backed down and never lost.