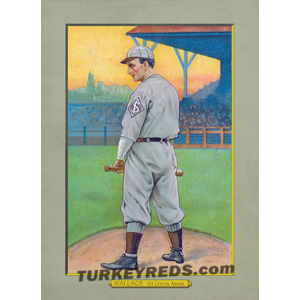 Wallace was born in Pittsburgh, Pennsylvania. He made his major league debut in 1894 as a starting pitcher with the Cleveland Spiders. After a 12–14 record in 1895, Wallace played outfield and pitcher in 1896. In 1897, Wallace was an everyday player as he became the team’s full-time third baseman, batted .335 and drove in 112 runs.

Perhaps the greatest defensive shortstop of his generation, Bobby Wallace was a fair right-handed hitter whose spectacular glove work catapulted him to the Hall of Fame. Wallace began his major league career as a pitcher, where his dazzling fielding soon convinced management to find a position that better suited his unique combination of skills. After spending two seasons at third base, Wallace moved to shortstop in 1899, where his strong arm, spectacular range, and fluid motion revolutionized the way the position was played. His defensive play was so outstanding that in 1911, a year in which Wallace batted only .232, Pittsburgh Pirates owner Barney Dreyfuss declared, “The best player in the American League, the only man I would get if I could, plays on a tail-end team, and few people pay any attention to him. I mean Bobby Wallace of St. Louis. I wish I had him.” On June 10, 1902, Wallace accepted 17 chances in a game against Boston, a mark which has stood as the American League record for more than 100 years. In 1899, Wallace moved to the St. Louis Perfectos (renamed the Cardinals in 1900) and changed position to shortstop. He hit .295 with 108 RBI and 12 home runs(second in the league behind Buck Freeman’s 25). Wallace changed teams again in 1902, when he joined the St. Louis Browns.

Wallace had no children, but had no doubts that he would have wanted a son to play baseball. Reasoned Bobby, “Where else could he lead a cleaner and healthier life in sunshine and fresh air? Or bring so much pleasure to so many people? And be paid for it too?” Bobby Wallace died in a nursing home in Torrance, California on November 3, 1960, the day before his 87th birthday. He was buried in Inglewood Park Cemetery, in Inglewood, California.