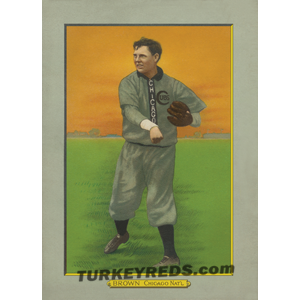 Elected to the Hall of Fame by Veterans Committee: 1949

Nicknamed “Three Finger” or “Miner”, was an American Major League Baseball pitcher at the turn of the 20th century. Due to a farm-machinery accident in his youth, Brown lost parts of two fingers on his right hand[1] and eventually acquired his nickname as a result. Mordecai Brown was one of the best National League pitchers in the early 20th century. With 239 victories, Brown’s winning percentage was a lofty .648. Brown’s most productive period was when he played for the Chicago Cubs from 1904 until 1912. During this stretch, he won 20 or more games six times and was part of two World Series championships. New York Giants manager John McGraw regarded his own Christy Mathewson and Brown as the two best pitchers in the National League.