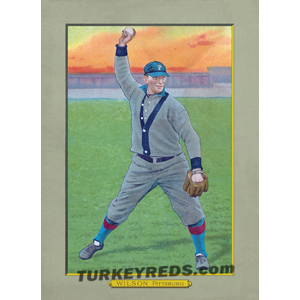 The Pirates signed Owen “Tex” Wilson and made him their right fielder in 1908. Wilson was an extremely quiet man, and he soon earned the nickname “Chief” not for having Native American blood, but for looking, to manager Fred Clarke-like a “Chief of the Texas Rangers.” At a pre-season gala at Clarke’s ranch in Winfield, Kansas, Wilson impressed Clarke with his ability to handle a lariat.

Handling a bat proved to be another matter. In his rookie year he was one of the worst offensive players in the league, as he hit .227 in 144 games, and all but 18 of his 120 hits were singles. The fans in Pittsburgh booed him regularly. The fact that this weak-hitting rookie played every day for a team that almost won the pennant is a testament to his defensive play. His fine fielding, especially his rifle arm in right field, drew comments early in his career. He hit from the left side, but he threw out enemy base runners with his right arm. He regularly recorded 20 assists per year, leading the league with 34 in 1914.

Owen Wilson is most remembered for hitting 36 triples in 1912, which is not only a major league record, but also a record for all of organized baseball. To the modern fan, that fact conjures up images of a speedy leadoff hitter racing around the bases, but that image does not square with Owen Wilson. At 6’2″ and 185 pounds, the left-handed hitting slugger was powerfully built and not particularly fast (his 1912 stolen base total of 16 was one shy of his career best), and he typically batted sixth or seventh in the batting order. Wilson typically blasted his triples over the heads of rival outfielders. “A three-base hit may usually be made only by driving the ball clear to the fence, particularly toward center field on most grounds,” he once said. “I made 36 triples my best year, but not a few of those long drives would probably have been homers had they not been stopped by the fence.”