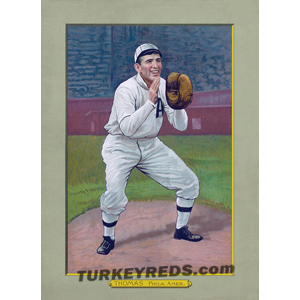 Ira Thomas was the first successful pinch hitter in the history of the World Series. While playing for the Detroit Tigers, he stroked a single while batting for Charley O’Leary against the Chicago Cubs’ Mordecai “Three Finger” Brown in the 9th inning of Game One of the 1908 World Series.

He played six seasons to finish his career with the Athletics. He was the team captain and shared equal catching duty with Jack Lappas the Athletics won consecutive World Series in 1910 and 1911. The team also won an American League pennant and a World Series, in 1913 and 1914, respectively, although Thomas did not play in either of the latter two World Series. In the 1911 season, Thomas finished eighth in American League MVP voting, with 17 extra base hits and 101 total bases. In 484 career games, he batted .242 with 327 hits and 155 RBI.

After retiring, Thomas was a scout for the Athletics, remaining with the franchise even as it relocated to Kansas City in 1955.