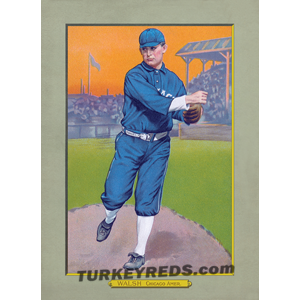 One of 13 children, Walsh was a fierce competitor. Walsh wanted the heavy workload the White Sox hoisted upon him. He also fielded his position with as much agility as any pitcher in the history of the game. During his six-year stretch of historic greatness, Walsh accumulated 963 assists, an amazing 344 more than any other pitcher in baseball. He fielded bunts like a territorial animal. Once, when a new third baseman came in for a bunt with a runner on second, Walsh got to the ball but couldn’t make a play to third because it was uncovered. Walsh then turned to the third baseman and said, “If you do that again, I’ll kill you. On bunts on that side of the field, you stay where you belong.” Though he finished his career with the lowest ERA (1.82) in baseball history, Walsh’s arm couldn’t withstand the overuse, and by 1913 the “Iron Man” pitcher was a shadow of his former self. Despite winning an impressive 182 games before his 32nd birthday, Walsh finished his career short of 200 wins. Walsh holds the record for lowest career earned run average, 1.82. He was inducted into the Baseball Hall of Fame in 1946.