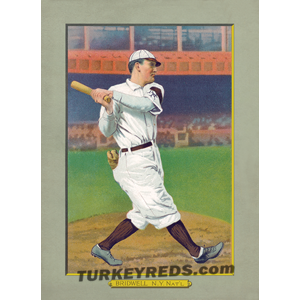 Albert Henry Bridwell (January 4, 1884 – January 23, 1969) was an American shortstop in Major League Baseball who played for the a number of teams in the early 20th century, most notably the New York Giants, when the team was managed by John McGraw. Bridwell hit the (apparent) single which caused the crucial “Merkle boner” running error of the 1908 season against the Chicago Cubs. The error ended up costing the Giants the pennant (the apparent winning run was nullified, the game was thus declared a tie, and the Cubs won the makeup of that game).

After Bridwell missed a sign in a game, McGraw chewed him out and called him names. Bridwell, who was an accomplished boxer, punched McGraw, causing him to tumble down the dugout steps. Bridwell said:

“He suspended me for two weeks without pay, but once it was over he forgot about it completely. Never mentioned it again. He was a fighter, but he was also the kindest, best-hearted fellow you ever saw. I liked him and I liked playing for him.”

On July 17, 1906, Bridwell married Margaret Lorraine McMahon,and the couple resided in Portsmouth. They enjoyed hunting and were said to be “crack shots. Giants outfielder Fred Snodgrass related this anecdote about Bridwell and Giants pitcher Bugs Raymond:
Bridwell never played in a World Series. Midway through the 1911 season, he was traded by the Giants, who would go on to play in the 1911 World Series, to the Boston Rustlers. He played his final two years in the Federal League.