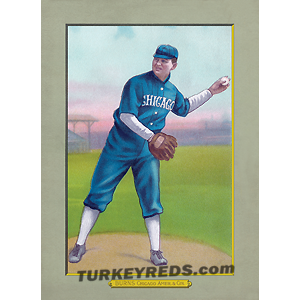 William Thomas “Bill” Burns (January 27, 1880 – June 6, 1953), nicknamed “Sleepy Bill,” was an American baseball player who played as a pitcherin Major League Baseball for five different teams from 1908 to 1912. Burns earned his nickname for his noticeable lack of intensity on the mound.

Burns is best known for his involvement in the alleged fixing of the 1919 Chicago White Sox World Series, dubbed the Black Sox Scandal.

Prior to the start of the 1919 World Series, a group of players from the Chicago White Sox agreed to intentionally lose the world series in exchange for money from gamblers. Burns met with Eddie Cicotte and Chick Gandil at The Ansonia, a hotel in New York City during the formative stages of the event.

It is likely that Burns operated on behalf of Arnold Rothstein, a New York businessman and gambler. Burns relayed messages back and forth between the players who had agreed to fix the games and a person whose initials were “A .R.”.
In his five-year career, Burns played for the Washington Senators, Chicago White Sox, Cincinnati Reds, Philadelphia Phillies, and Detroit Tigers.[2] In his rookie season, 1908, Burns had a 1.69 earned run average (ERA) which was sixth best in the American League. However, he had a career record of 30–52 as a pitcher and never won more than eight games in a season.