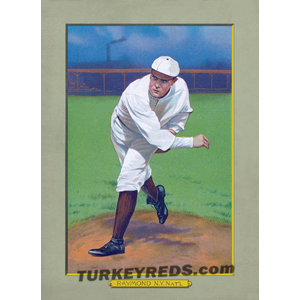 Raymond was known for his spitball and got his nickname because of his zany antics on the mound. What might have been a promising career was short-circuited by a perpetual addiction to alcohol. The only manager who could keep Raymond in line for any length of time was hard-nosed Giants manager John McGraw. McGraw picked him up in the Roger Bresnahan trade before the 1909 season, and Bugs won 18 games for him that year.

However, Raymond could never stay sober for long. McGraw tried everything – including fining him so there wouldn’t be any money left for drinks and hiring a detective to trail Bugs – but nothing worked. In addition, Raymond had a subpar performance on the mound in 1910, going 4-11. He was released midway through the Giants’ 1911 pennant-winning season.

Discarded by the Giants, separated from his wife, and with his five-year-old daughter recently dead from influenza, Bugs drifted back to Chicago where he played semipro baseball and again worked as a pressman. At midday on Saturday, September 7, 1912, a maid entered Raymond’s shabby room in the Hotel Veley and found him dead in his bed. A coroner’s physician found that he had died from a cerebral hemorrhage due to a fractured scull. The police arrested a man, Fred Cigranz, who admitted to beating up Bugs several days earlier during a game at the sandlot field at Lawrence and Elston avenues, where Bugs had played baseball as a youth. Raymond also had been in a brawl three weeks earlier and had been hit several times in the head with a baseball bat. When he received word of Raymond’s passing, McGraw said “that man took seven years off my life.”