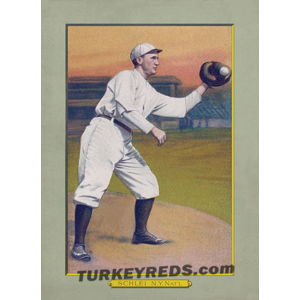 The first Red’s catcher to wear shin guards, George Henry “Admiral” Schlei was a Major League Baseball catcher. He played all or part of eight seasons in the majors, between 1904 and 1911, for the Cincinnati Reds and New York Giants. He was a starting catcher from the 1904 to the 1909 season.