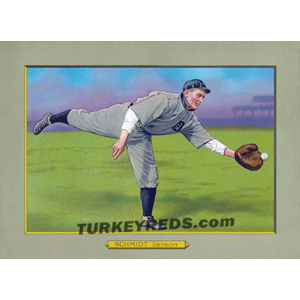 Schmidt was born in Coal Hill, Arkansas and began his professional playing career in the Missouri Valley League in 1902. Joining the Tigers in 1906, Schmidt shared playing time with two other catchers on the team’s roster, John Warner and Fred Payne, in baseball’s first season-long platoon arrangement.  The following season, he became the team’s starting catcher as the Tigers won three consecutive American League pennants from 1907 to 1909.

Schmidt had 6 hits and 5 RBIs in three World Series from 1907 to 1909. He also holds the dubious distinction of having committed five errors and allowed 16 stolen bases during the 1908 World Series—both records which still stand today. Schmidt also made the last out in consecutive World Series in 1907-08, the only player ever to do so. Both World Series were won by the Chicago Cubs—the last World Series the Cubs won until 2016. Schmidt also let the 3rd strike with 2 outs in the bottom of the ninth of Game 1 of the 1907 Series get away, allowing a run to score, which tied the game. After 12 innings the game was called on account of darkness and the game was ruled a tie. Also, in the 1907 World Series, Schmidt gave up a record 7 stolen bases in Game 3, the most against one catcher in one Series game.

As a young man, Schmidt worked in the coal mines and developed a muscular and powerful physique. According to the Detroit Tigers information office, Schmidt beat Ty Cobb in several fights. In the second fight, Schmidt knocked Cobb unconscious but admired Cobb’s resiliency while fighting and stayed to revive Cobb as he lay motionless on the Tiger dressing room floor. Despite their clashes, Schmidt and Cobb (both tough as nails) became close friends until Schmidt’s death in 1932.

Schmidt also played a role in Cobb’s March 1907 fist fight with an African American groundskeeper. When the groundskeeper tried to shake Cobb’s hand, Cobb slapped him and chased him to the clubhouse. The groundskeeper’s wife yelled at Cobb, and Cobb began to choke her. Schmidt intervened and stopped Cobb from hurting her further. Cobb and Schmidt then got into a fight and had to be separated by their teammates.

Schmidt was a skilled brawler who reportedly even fought an exhibition match with the heavyweight champion, Jack Johnson. He felt that he was the best fighting baseball player in the league and challenged all baseball players to a match.

Aside from his prowess as a fighter, Schmidt was also known for other displays of his physical toughness. As a catcher, Schmidt never wore shinguards. He could force nails into the floor with his bare fists. He once visited a local carnival with some of his teammates and wrestled and pinned a live bear. Schmidt’s career was shortened due to numerous fractures sustained over the years of his thumb and fingers.