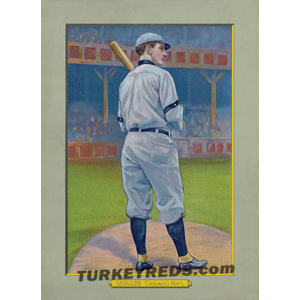 Frank “Wildfire” Schulte was born in Cochecton, New York, in 1882 to German immigrants. He played independent baseball as a teenager, despite his father’s opposition to the idea. From 1902 to 1904, he played for the New York State League’s Syracuse Stars. He was purchased by the Chicago Cubs in August 1904.

Perhaps as dangerous on the base paths as at the plate, Schulte, who daringly stole home 22 times in his career, became a fixture on Chance’s Cub “machine”. Along the way he picked up the nickname that became synonymous with him. Legend states that Schulte admired actress Lillian Russell and that he and his teammates saw her perform in a play called “Wildfire” in Vicksburg, Mississippi. The Cub players then enjoyed a party thrown by Russell, and Schulte, an owner of race horses (some of which were trotters he raced on ice in upstate New York) subsequently named one of his trotters Wildfire. Before long the Chicago sportswriters got wind of these developments, and he too became known by the name.

Schulte’s eccentricities weren’t limited to his nickname, as he prompted Tinker to “doubt…whether a quainter or more original character ever existed in the National Pastime.” Wildfire was known to comb the streets looking for hairpins; he claimed that they predicted his success in the batter’s box. The bigger the hairpin, the greater the success Schulte would achieve. A bent hairpin, he further surmised, indicated the direction of his upcoming safety.