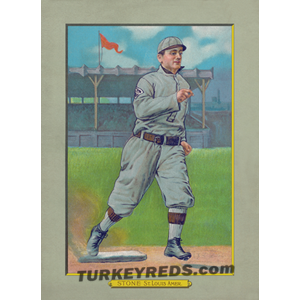 Stone’s statistics fell off in both 1907 and 1908, though he was still an outstanding hitter. One account indicates that he contracted malaria in 1908, and Stone’s production plummeted in 1909 when he suffered an injury to his ankle. That injury cost Stone his speed, which had enabled him to beat out many infield hits. He also had problems with his arm, and “any time a ball was hit into his territory the opposing base runners advanced almost at will. The worry over all these things caused Stone’s batting to suffer and as a result the sensation of the American League of 1906 was a near joke in 1910.” Stone never hit higher than .300 after 1907, and his average fell to .256 in 1910, his last season in the major leagues. Stone returned to the Milwaukee Brewers in 1911, batting .282, but injuries led him to retire from professional baseball just 12 games into the 1912 campaign. He wrote to manager Duffy “that he has retired from the game for good and will spend all of his future time attending to his business in Nebraska.”

Stone soon entered the banking industry in Coleridge, Nebraska, and retirement afforded him more time to play the violin. He also owned a Western League franchise in Lincoln, Nebraska in 1916. In 1940, he and his wife Pearl (Moore) moved to Clinton, Iowa, near his birthplace. George Stone died of a heart attack in Clinton at age 67 on January 3, 1945. He was survived by his wife and son, Dr. Vean M. Stone. He is buried at Coleridge Cemetery in Coleridge, Nebraska.