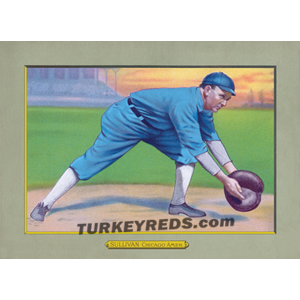 William Joseph Sullivan, Sr. (February 1, 1875 – January 28, 1965) was an American professional baseball player and manager. He played as a catcher in Major League Baseball for 16 seasons, most notably for the Chicago White Sox. Although he was a relatively weak hitter, he was considered one of the best defensive catchers of his era.

Sullivan’s reputation as a defensive standout is enhanced because of the era in which he played. In the Deadball Era, catchers played a huge defensive role, given the large number of bunts and stolen base attempts, as well as the difficulty of handling the spitball pitchers who dominated pitching staffs. He had to catch every type of pitch imaginable, such as shine balls, spitballs, knuckleballs, and emory balls.

Though “never very strong in stick work,” his Deadball Era contemporaries believed that Billy Sullivan’s “brilliant performances behind the bat … more than offset his weak hitting.” Although his paltry .213 lifetime batting average is the second worst all-time (next to Bill Bergen) among players with at least 3,000 at bats, Sullivan developed a reputation as a brainy backstop with an uncanny ability to handle pitchers. Described by Ty Cobb as the best catcher “ever to wear shoe leather,” Sullivan was “the best man throwing to bases in the American League,” and “no man in the business [knew] more about getting the best work from a pitcher and holding an infield together.” Sullivan also revolutionized the way his position was played; he is credited as the first catcher to position himself directly behind the batter and as the inventor of an inflatable chest protector.